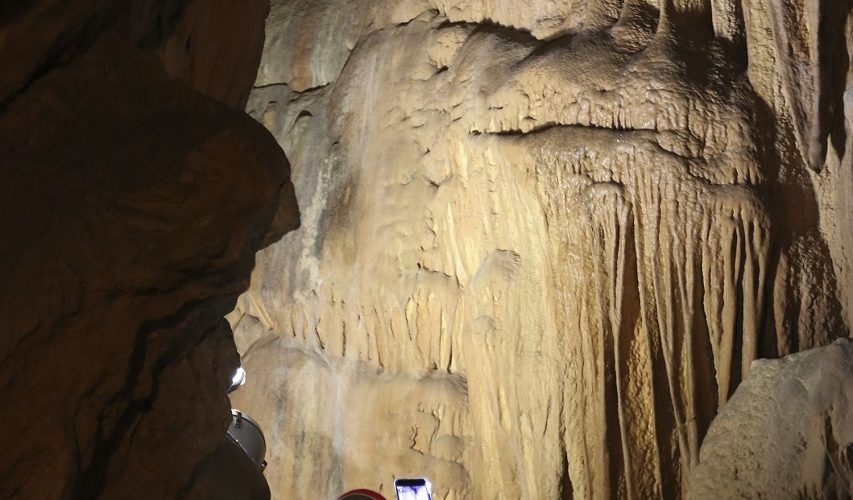 For millions of years the Ponikvica Stream ran through the Ponikvanski kras Plateau, trickled through limestone and, in the heart of the Lower Savinja Vally, carved the magnificent karst cave Pekel. With a bit of imagination, one can discern an image of the devil above the cave entrance. Also, in the winter when the temperature in the cave is higher than the temperature outside, vapours can be seen coming out of the cave. That made people afraid of the cave, hence the name Pekel Cave (eng. hell).

The Pekel Cave is a karst cave with a long history. More than 3 million years old, it lies in the middle of the Ponikvanski kras region, about 4 km north of Šempeter v Savinjski dolini. The cave was created by the Ponikvica Stream that disappears in front of the cave and reappears in the cave as the Peklenščica Stream. The 1159-meter long path through the cave is easy and well maintained.

Water and dry parts of the cave

On two floors, the visitor can see two faces of one cave: the water part and the dry part. Through the lower, water part of the cave runs the Peklenščica Stream, leading to the greatest monument in the cave, the 4-meter high waterfall. It is the highest underground waterfall in Slovenia that can be seen from the immediate vicinity. The upper part of the cave is dry and full of cave structures. Because the water is carrying many substances, the dripstones glitter in the various shades of red and brown.

Life in the cave

The Pekel Cave is home to many different life forms. Lichen, moss and algae thrive on the walls and in the water. Beetles, spiders, slugs, crabs and bats have also found shelter in the cave.

When you leave the cave through an artificial exit at the top of the cave, you re-enter daylight in the middle of a beautiful regional park with a cottage for visitors.

We would like to extend a warm welcome and hope to see you in our beautiful cave.

If you wish to visit us outside of regural schedule hours we would recommend that you call us and we will arrange a guided tour that is best suitable for you. Don’t hesitate to call us.
We are looking forward meeting you.